In the 1950s, Cleveland, Ohio had more accordion players than bricklayers. The east side neighborhoods were thick with European heritage, and music was a big part of it. Radio & TV filled the air waves with songs that contained elements of this tradition. When Mrs. DeSapri saw her first son using a cheese grater to imitate the great Dick Contino, an accomplished and popular accordionist of the time, they realized music lessons would be in order. And so began the musical career of one Dennis Lino DeSapri.

In the 1950s, Cleveland, Ohio had more accordion players than bricklayers. The east side neighborhoods were thick with European heritage, and music was a big part of it. Radio & TV filled the air waves with songs that contained elements of this tradition. When Mrs. DeSapri saw her first son using a cheese grater to imitate the great Dick Contino, an accomplished and popular accordionist of the time, they realized music lessons would be in order. And so began the musical career of one Dennis Lino DeSapri.

Playing the accordion came very naturally to the young boy, and within 6 months he was not only sight reading the music, but also playing (by ear) the recorded music his father would play every Sunday before the pasta was served . . . not the typical polka or waltz, but complicated works from Giuseppe Verdi to Mario Lanza, from Jerry Vale to Dominic Cortese (another accordionist from Italy). Before long, all of the family parties in the “old” neighborhood would invariably have little Denny as the musical entertainment. Even the old men would take the cigars out of their mouths long enough to sing right up next to the boy so he could learn some of the old back country Italian songs that were rarely recorded in this country. And learn he did.
As time went on, Denny had learned to play several other instruments, performing in many different musical ensembles, and playing venues all across the Northeast Ohio area. The show band “Amici” took him from coast to coast, playing festivals and private affairs. Through it all, however, the accordion kept coming back as part of the act. Although the instrument has faded somewhat in main stream popularity over the years, when in the hands of a capable musician, people always react favorably. Jazz standards (the accordion is actually a warm & wonderful instrument for the standards) began to become part of Mr. DeSapri’s repertoire, and when mixed in with the old world songs, the atmosphere becomes relaxed and enjoyable.
In these days of hip-hop music and gymnastic vocalists, a strolling accordionist, who offers some soft, enjoyable melodies may be just the unique alternative experience many people have been longing for. And if the reaction is just right, Mr. D will vocalize along with the instrument he’s playing. If you ever get the chance, take a look in his eyes as he sings . . . you’ll see the glow of love for the true mistress in his life . . . . music. Now, that’s Italian.

Everyone enjoyed the traditional Italian accordion music by Dennis DeSapri!!!

CLE Music Group was very easy and professional to work with from start to finish. Scott and his team always were there to answers any questions and provide help. Our guests enjoyed Dennis DeSapri and singing at the Rehearsal Dinner we had down in Little Italy. He was on time, professional, and very accommodating. He played the accordion and sang during the cocktail hour and the first part of dinner. I wouldn’t hesitate to hire him again.

We used The Orchestra for my son and daughter in law’s reception at Landerhaven. Our guests were blown away and started commenting the moment they walked into the room. The band played the right music during dinner and knew the right mix to all ages on the dance floor. I can honestly say, the dance floor was never empty.

Excellent customer service, outstanding performers (The Orchestra and Dennis DeSapri on accordion) and just a friendly bunch all around!

Hit of the party! 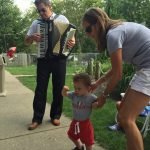 Dennis did a great job on accordion! He worked with me to time things perfectly, and his performance was exactly what we were looking for! He did several songs in Italian, which made the old timers at the party so happy! Everyone loved having him there.

Dennis was a huge success with his friendly and professional interaction

Dennis was hailed by all 100 guests at my sister’s 8th birthday party as a nice guy, an excellent accordionist and performer and a consummate professional. Most of our guests had never experienced the ambiance of an Italian accordionist and soloist and were fixed on his performance for his entire engagement. Not only was his performance of the perfect songs for this occasion, but the authentic emotional impact of his entertainment touched our guests with smiles, tears and hearty applause. Dennis is a treasure for all lovers of Italian music at its best. Thanks Dennis!