Brian McDonald began his DJ career out of necessity in 1997 while serving in the United States Marine Corps. He was part of an elite cadre that not only protected U.S. Embassies from attack; the detachment’s living quarters was also the entertainment and social site for many diplomats to relax after a hard days work. As the parties grew larger the need for a DJ increased. Brian took on this challenge with much success and continued to DJ at many foreign posts abroad.

Brian McDonald began his DJ career out of necessity in 1997 while serving in the United States Marine Corps. He was part of an elite cadre that not only protected U.S. Embassies from attack; the detachment’s living quarters was also the entertainment and social site for many diplomats to relax after a hard days work. As the parties grew larger the need for a DJ increased. Brian took on this challenge with much success and continued to DJ at many foreign posts abroad.

Fast forward to 2002, and Brian was hired as the resident DJ at Images of Strongsville and McCarthy’s of Lakewood, where he stayed on for many years. Through references, he was asked to perform his first of many wedding receptions in 2003.
In 2005, Brian was asked to provide production services to world renowned DJ Aladdin, who specializes in Indian wedding receptions. A strong working relationship was formed and Brian continued to learn the many aspects of a successful Indian wedding. While providing production services for another large Indian wedding in 2007, Brian was asked at the last minute by the DJ to fill in as DJ. Brian, having been trained by the best, didn’t shy away and got the job done wonderfully.
Today, Brian travels all over the USA providing wedding services and holds a residency at Tradesman in Parma. Brian has been with Cleveland Music Group since 2009. His showmanship, production quality, and attention to detail will amaze all in attendance.

As always, CMG sends us the best DJs in the area. Our private membership and their guests enjoyed wonderful entertainment all day on July 4th. The pool party with DJ BAM was lively and fun. DJ Cadence kicked it up for the evening cookout and fireworks. Both were on time, great with our members (even taking requests), and easy to work with. CMG is always my first call for entertainment and talent.
Thank you!

1) The sound tech Tyler was easy to work with at our women’s lunch. He was booked on short notice and was very professional.

3) The Best Choice DJ (DJ BAM) for our Closing Reception got the job done and there is nothing more that I love than something easy.

4) Rossi & Romano closed out the night with us on the patio of the Rock Hall on a beautiful September night. They were wonderful and our guests loved the songs, the voice, and guitar. 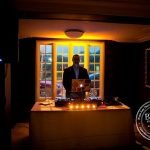 My husband and I chose the Cleveland Music Group’s best choice package for our wedding because we did not have a certain DJ we wanted, we just knew that we trusted CLE Music Group’s reputation in the community.

DJ BAM was assigned to our wedding and we loved him from our first call. He asked us what year we graduated high school and then said “I got this covered.” We wanted a packed dance floor and we certainly got it. Even our photographers commented that once open dancing started, it never stopped for a second.

DJ BAM also did a great job with announcements and toasts despite our venue’s unconventional set-up. He kept the event moving and was professional and friendly. Our guests loved him.

I loved him so much that as the bride I tried to give him an entire envelope of cash at the end of the night in addition to his tip money. OOPS.

Chris and Molly Wells
The Ballroom at Park Lane

OHS was a huge success!

Thank you DJ Brian McDonald for your service. You never disappoint us and made Orange High School prom the best yet!! We look forward to working with you next year.

Everyone loved DJ Brian. He played a variety of songs fast/slow, older/newer that kept everyone on the floor and having a blast! Several people commented that he was very good.

My wife and I are both musicians, so we were very picky about what music we wanted played and the standard of DJ we were looking for. DJ Brian McDonald did an exceptional job! He nailed all of our requests for parent dances and introductions, and did an unbelievable job live spinning and creating the club atmosphere we were after. Our one minor complaint is that he didn’t play most of our “Must play” and playlist songs, but he kept the dance floor packed all night and was otherwise so incredible that it didn’t end up making it unenjoyable by any means. We received compliments on him all night and would use him again in a heartbeat. Very professional, laid back, and easy to work with. I highly recommend him to anyone!

We had the pleasure of having DJ Brian McDonald at our wedding reception! He was fantastic! Everyone had a blast and the dance floor was packed all night! 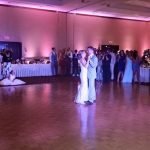 DJ Brian McDonald is awesome. The guests raved about the music. They liked the continuous playing of music, no gaps at all. The coral uplighting that Scott chose for us was on point. It completed the look we were striving for. I would have never thought the lighting would make this much of a difference. I have never seen so many guests dance all night.

DJ Brian McDonald was great. He played excellent music throughout the night and went above his duties as a DJ to make us feel comfortable. Would definitely hire again.

Mitali Shah and Michael Roblin
Windows on the River

Thanks to Brian for making our party unforgettable. The music was great. Everyone danced and had a great time. Guests even asked for his name for future parties. I appreciate his flexibility, as the weather changed the dance floor plans at the last minute. Thanks again!

We used 2 DJs and they were very polite, personable, professional, and current. They were very easy to work with. I would eagerly request Brian for future events!