PJ has surrounded himself with music for his entire life. As the youngest of four boys, he came to love just about every genre of music. He took his passion for music with him to college at the University of Maryland Baltimore County, where he studied audio engineering and music technologies. While enrolled, he worked as a DJ at the university station and performed at campus bars and clubs until he graduated in 2011.

PJ has surrounded himself with music for his entire life. As the youngest of four boys, he came to love just about every genre of music. He took his passion for music with him to college at the University of Maryland Baltimore County, where he studied audio engineering and music technologies. While enrolled, he worked as a DJ at the university station and performed at campus bars and clubs until he graduated in 2011.

After college, PJ continued to produce and record his own music. He began releasing music, mashups, and remixes online, some of which were featured on major music blogs such as Barstool Beats and Hype Machine. He always thought that becoming a professional DJ would be in his future, and after moving to Ohio he finally made that dream a reality.

PJ’s vast musical upbringing allows him to provide something for everyone at your event. He believes there is nothing better than connecting with as many people as possible through music. PJ brings a unique, upbeat, and professional expertise that will keep you and your guests happy for the entirety of your event.

PJ is the PERFECT Wedding DJ! 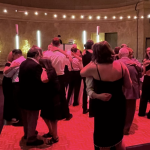 PJ was everything we wanted for our wedding DJ and more! He was the life of the party, the crowd loved him (our guests even chanted his name!) and he made sure our dance floor was filled all night long. It was a pleasure working with him and he went above and beyond to make us feel cared for and to ensure we had a blast with our family and friends. PJ is by far the best DJ at a wedding we’ve ever seen, and we’re incredibly lucky to have had him for ours!

Cleveland Music Group delivered with DJ PJ!! Our dance floor was full and we had many people during and after the event comment on how awesome he did. He listens and takes all suggestions from you and was so good about checking in beforehand and even throughout your event to ensure everything went smoothly. Eric with Cleveland Music Group was great to work with prior and before to get everything booked and squared away. Highly recommend!!

DJ PJ did an incredible job for our wedding. We met a couple weeks before our wedding and shared with PJ our vision and kind of music we wanted to hear. We even wanted to do something very specific for our reception intros and he was really flexible and made it work! All night the music was great and our guests of all ages were dancing. Any questions he had he would ask us before playing the song, and any last minute requests we had he made sure to squeeze them in. Our guests also mentioned how fun the music was after the wedding! We would recommend PJ to any of our friends/family that are in need of a DJ for an event.

The Cleveland Music Group was wonderful to work with! My husband and I got married during covid so we were having a reception on our anniversary to celebrate with our family and friends. We were able to interview a couple DJs to see who was the best fit for us. We went with DJ PJ and he was AMAZING!! We shared a few songs so he knew our taste and told him we trusted him to just roll with it. He played so many great songs from the different genres we provided and nailed it. Our guests even loved him. 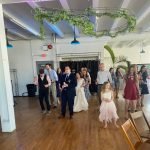 DJ PJ was the perfect fit for our wedding! From start to finish, he understood our music taste and really created the perfect playlist. Day of our wedding, he made sure to check in with us before the ceremony to see if we needed anything. He even helped cue me, the bride, on when to walk down the aisle since we were wrapping around a building. DJ PJ paid close attention to each detail and made sure to read our last name and bridal party’s names correctly when we were announced. With the number of compliments we got from our friends and family about how the reception went too, we’ll definitely be recommending him to everyone for their future events! I could not ask for a better DJ for our wedding!

(Photo: DJ PJ helping the party get started with the Cupid Shuffle.)

PJ was flawless! Went above and beyond.

DJ PJ did an outstanding job from the start. We met when we first hired him and again a few days before the wedding. We were a little picky and also requested songs from our invitees, so I’m sure we were a bit of a pain, but PJ was extremely accommodating and assured us it was going to work out great, and it did. He rolled with any last minute decisions, corralled the wedding party for announcements, made all the right announcements, and most importantly he kept the dance floor full all night with the perfect playlist. I would highly recommend PJ to anyone. He also made an awesome video after the fact that consisted of pictures and videos throughout the night, including shots of our setup which he did before anyone even got there. Above and beyond. And thank you to Eric Smith for pairing us with PJ!!

DJ PJ was hands down incredibly to work with! We met with PJ prior to our wedding and he listened to all of our needs. PJ was so down to earth and attentive the day of our wedding. The music was amazing and the dance floor was full all night! PJ went above and beyond and made our day so perfect! Highly recommend.

He rocked the house!

DJ PJ is the man! I don’t think at any point during our wedding the dance floor was empty. With the being said, he played a great variety of music that got all of our guests dancing. Our guests couldn’t stop talking about how amazing the DJ was.

He was super easy to work with and there for us every step of the way. He even came by on the Friday before our wedding took place to chat with us and production at the House of Blues. He went above and beyond for us. I would HIGHLY recommend DJ PJ!!

CMG was so helpful and quick to respond every step of the way while planning the music for our wedding reception. The result was to work with two phenomenal professionals, John Toula and his Jazz Trio, who played during our cocktail hour which set the mood for the rest of the evening, and DJ PJ, who kept everyone dancing the entire night. My guests came up to me declaring “I’ve never been to a wedding where the weird people were the ones who WEREN’T dancing.” The floor was packed, the whole time, I’ve never seen anything like it, and I’m ecstatic! Thank you everyone for making our wedding such a hit!

PJ is the best! 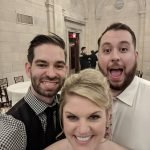 When the DJ we had planned to book for our wedding fell through, we weren’t sure what we were going to do and didn’t have a lot of time to figure it out. We found DJ PJ and he was an absolute savior. We wanted to book a DJ who was the same age as us and was willing to work with us to play the music we wanted, and not the same generic “crowd pleasers” you hear at every wedding. PJ worked very hard to make sure we got everything right and was more than willing to fulfill very specific song requests for different parts of the night. He also was able to deal with the very difficult acoustics that come from having your wedding in a giant marble room like Ariel Pearl Center. We couldn’t recommend him enough!

DJ PJ Carmack was personable but never got in the way. He played what we wanted him to play and the dance floor never stopped until midnight. 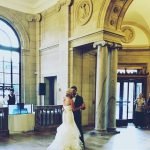 Loved the music that DJ PJ played and kept the party going. Captured our style of preferred music throughout the entire reception.