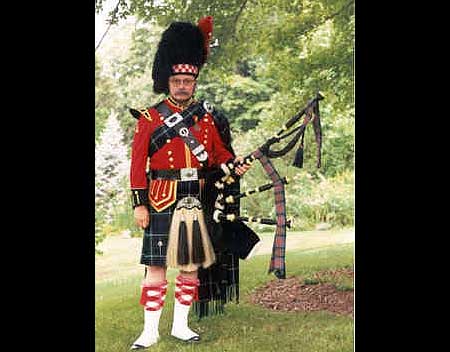 Donald is piper to the clans Wallace and Lamont, and the Ritual piper for the Scottish Heritage Association. As a result he has an extensive repertoire of Scottish, English and Irish tunes from which he draws to customize any gathering.

His knowledge of, and desire to perpetuate an unconventional style of music based on a much earlier parallel piping culture *(see note below), as performed by the old “community” pipers of Cape Breton and Nova Scotia, and now virtually extinct, is unique among pipers.

Drawing on little known selections of the late Joe Hughie MacIntyre, Sandy Boyd, Alex Currie, Rory MacKinnon and Alan MacFarlane, curious tunes such as The Red Shoes, Ardrishaig and The Nameless Strathspey will surely add to any event.

Additional selections from contemporary proponents such as Scott Williams and Barry Shears makes for a matchless presentation of piping styles.

Instead of recognizing the old style of dance hall piping as a viable remnant of an earlier time and culture, it was subsequently looked upon as an aberration to be corrected.

We were totally blown away with Cleveland Music Group! DJ Scott Jones was amazing and […]

From the beginning, we knew we wanted Scott to be our DJ and MC for […]

Best part of our reception!

We could not say enough great things about The Avenue! They absolutely knocked it out […]