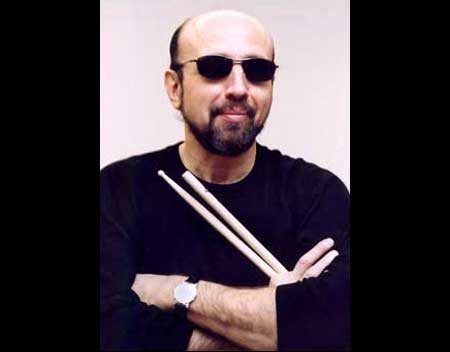 Shortly following and again on Bellson’s recommendation, Ray auditioned for and was hired by Sammy Davis Jr., becoming his personal drummer. Ray played with Sammy on all of his TV appearances, including The Tonight Show, Merv Griffin, and Mike Douglas, as well as on Sammy’s own show, Sammy and Company. Sammy took Ray on the road to Japan, New Zealand, Europe, and Australia, and to famous theatres including Carnegie Hall, the London Palladium, and the Sydney Opera House for the live recording of Sammy (available as a compilaiton of Sammy’s greatest hits).

During his time with Sammy, Ray worked with great jazz artists like JJ Johnson, Doc Severinsen, Harry “Sweets” Edison, Ray Brown, Paul Smith and Al McGibbon. Ray eventually settled in Las Vegas, where he played in the Mickey Finn Show and in the house band at Ceasar’s Palace.

Upon returning to Cleveland, Ray began teaching in the Jazz Studies Program at Cuyahoga Community College. More recently, he has worked with noted locals Ernie Krivda and the Fat Tuesday Big Band, the Cleveland Jazz Orchestra, The Dave Banks Big Band, Helen Welch, Evelyn Wright, Laura Varcho, After Dark, the Joe Hunter Trio, Dave Sterner and many others. He also leads his own group, Ray Porrello and Fine Jazz, and is the drummer for The Avenue band.

DJ Eric Smith was exactly what we wanted at our wedding. He was professional. He […]

Evan gets the party moving!

DJ Evan and CLE Music Group were so great to work with! Evan was not […]

The Bottom Line was the perfect band for our group, which ranged in age groups […]

1) The sound tech Tyler was easy to work with at our women’s lunch. He […]

DJ Evan Foltz was amazing from the Skype meetings before the wedding, answering every email […]

DJ PJ was hands down incredibly to work with! We met with PJ prior to […]

This band is the best we have had the privilege to experience!

Everyone, of every age and every background complimented my husband and I on the Sly […]

Kimberly Nelson
The Sly Band
Windows on The River

PJ is the best!

When the DJ we had planned to book for our wedding fell through, we weren’t […]