The Avenue band is one of the hottest Cleveland wedding bands as well as one of the most requested bands on the Cleveland Music Group roster for all occasions, including private, corporate and public events. The Avenue presents a young, fresh sound that can stylishly perform decades of music thanks to the collective experience from its talent.

The Avenue was named Cleveland’s Best Cover Band 2017 by Cleveland Magazine and chosen by the Ritz-Carlton Cleveland to perform at their grand renovations reveal.

With a uniquely modern R&B/pop style, Tiffany Marchak has been wooing audiences all over Northeast Ohio since her return from the American Idol Season 2 National Semi-Finals in L.A. She was also a National Semi-Finalist (top 25) for ABC's The One. In addition to winning WKYC's In The Spotlight, she was a Cleveland Idol finalist and has appeared at Pickwick & Frolic, Geauga Lake, and participated in various commercials, corporate videos, and events. She has also recorded jingles for American Greetings and in 2017, her voice was featured in a pop song on an episode of Buddy Thunderstruck on Netflix. When not singing with and acting as band leader for The Avenue, she assists Guinness world record holding magician Rick Smith, Jr. Tiffany is a founding member of The Avenue.

Andre Frazier has been captivating audiences with his voice from a very young age. He began discovering his singing talent at the age of 9, performing solo pieces at his grandmother’s church. As a teenager, he performed onstage with a local boy band, entertaining at various local events. He graduated from Kent State University with a B.A. in Music with a concentration on classical voice. While at Kent, he performed in numerous solo and ensembles, including singing in the chorus ensemble for the Kent State Stark production of Steven Sater’s musical, "Spring Awakening." He has also performed on hip-hop albums and at the national Exponential conference for over 5000 attendees. He currently performs with The Angie Haze Project and leads the Momentum Christian Church band as lead singer and Worship Director, where his tenor/baritone voice delights the members and visitors alike.

Leigh A. Peterson began performing professionally at Pickwick & Frolic along with Tiffany. Once named an "Outstanding Jazz Musician" for vocal performance by the IAJE, her proudest moment was appearing live with Neil Young in his musical, Greendale, as an extra dancer. She's also performed as a backup singer for jazz vocalist Helen Welch and as "Heartbeat," a mod singer and dancer in the British Invasion tribute band, The ReBeats. She has recorded jingles for American Greetings and appeared in many films, commercials and ads. In 2017, she appeared in a car commercial with Indians pitchers Corey Kluber and Andrew Miller. Leigh has worked in the Cleveland Music Group office since 2005 and is a founding member of The Avenue.

Ray Porrello is the former personal drummer of Sammy Davis Jr. Ray toured the world with Sammy and appeared with him on his TV appearances including The Tonight Show, Merv Griffin, and Mike Douglas, as well as on Sammy's own show, Sammy & Company.

Erin Vaughn is a musician and educator, born, raised, and residing in Northeast Ohio. He is a graduate of The University of Akron (B.A. in Jazz Studies) and Kent State University (M.A. in Music Theory). As a full-time faculty member at Kent State University at Stark he is an instructor and coordinator for the university’s guitar department and small group studio ensembles. Erin has performed in ensembles, bands and professional theater productions all over Northeast Ohio, Michigan and New York, sharing the stage with Train, Third Eye Blind, Pete Yorn, Foreigner, and others.

Donald Pelc started playing guitar at the age of 9. He was a student at Cleveland's School of Rock, where he later toured with the school's group of National All Stars, playing throughout the midwest. He now works at the school as a guitar instructor and show director while finishing his jazz guitar studies with Bob Fraser at Cleveland State University, where he will receive a B.A. in guitar performance.

Chris Vollstadt (saxophone) has played just about every popular music style from the last 100 years from trad jazz to reggae, soca to classic rock and 50s to modern jazz. He traveled the world with Holland America and Royal Caribbean cruise lines, where he backed up performers such as Jim Nabors, Nell Carter and Vic Damone, to name a few. He spent time playing shows in Branson, MO before getting back to Cleveland. In Cleveland he has played with his own jazz/rock group, The Neutrons, Ernie Krivda and Fat Tuesday Big Band, Cle Keys, and TCB, among others. Chris is also an accomplished software developer, and he develops software for the Electronic Wind Instrument (EWI), an electronic instrument that opens a new world of sounds to sax players. He is thrilled to utilize all his talents playing with The Avenue. 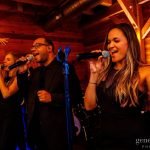 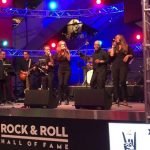 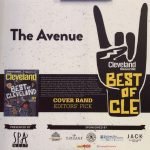 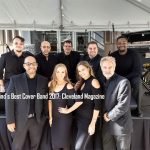 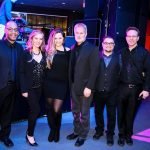 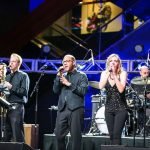 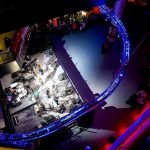 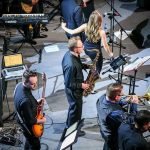 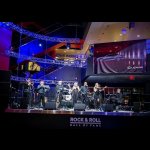 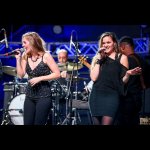 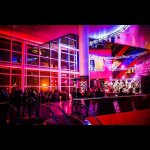 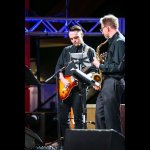 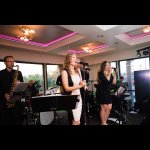 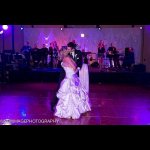 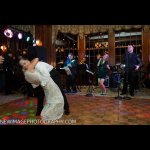 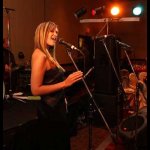 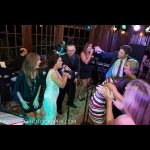 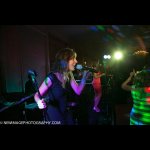 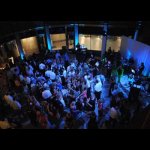 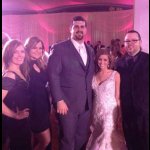 Cleveland Browns’ John Greco with The Avenue singers at his wedding 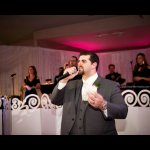