Songs for the Father Daughter Dance 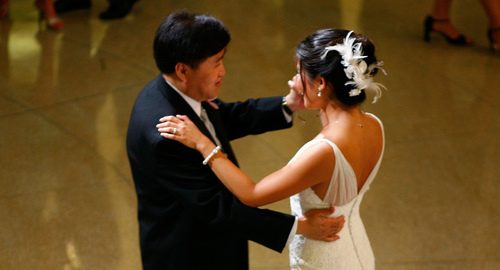 The Father/Daughter Dance at a wedding is almost always a bittersweet affair. Here are some hand-picked songs that encompass all the feelings the big day brings. Our in-house wedding planning experts have remarked on some of their favorites!

“Unforgettable” is a touching song about the people in our lives that are… well~unforgettable. However, Natalie’s cover of her late father’s song is even more beautiful when turned into a duet as it is here.

2. “You Are the Sunshine of My Life” – Stevie Wonder

So many Father/Daughter songs tend to be sad. “You are the Sunshine of My Life” is an upbeat promise of a lasting love. And Stevie is an artist that all generations love. Tony from Tricky Dick & the Cover-Ups says “you can’t EVER go wrong with Stevie Wonder!”

Oh no, now they’re getting sad. “I Loved Her First,” is a beautiful country tearjerker about a father talking to his future son-in-law. This song might be used a lot, but Leigh of The Avenue band says the bittersweetness is worth it. “The tears always well up in my eyes with this one, usually as I am on stage about ready to sing and worrying about my makeup.”

DJ Scott E. Jones loves this choice. “Every time I hear ‘You’ve Got a Friend I Me’ by Randy Newman I’m transported back to Toy Story,” he said. “Wow! What a great movie.”

“I Hope You Dance” contains advice for children of all ages. Womack even performed it with her daughters in mind which makes it an excellent choice for a Father/Daughter dance.

With full orchestral and choral backing, “You Raise Me Up” is an exciting song as well as a crowd favorite. It’s so powerful, it’s a good choice for brides or parents who are shy to dance in front of people. “I definitely couldn’t pick this one for myself, because I would be too busy singing to dance,” said our office manager Kim.

This song always gets to me. Written by Stevie Nicks at a crossroad in her life, it’s about embracing change and isn’t that what weddings are about? “Everyone knows and loves this song and sings along,” said Erin of The Element. “You can’t go wrong with this one for a parent dance!”

Written as a tribute to Dunn’s father, this song is a country classic.

This song is about unyielding support and guidance and being grateful for both.

“The Way You Look Tonight” is about sealing a special memory in your head to look back on when times are difficult.

Speaking of Sinatra, this song’s title practically speaks for itself. This song is Nancy’s tribute to her late father.

This is old school Beyoncé. It was written in 2003 and inspired by her father and manager’s devotion to his family.

A classic song about the joy that children bring into your life is improved by the Johnny Cash’s soothing bass.

A song about eternal devotion and love and a standard radio favorite.

Originally featured on his daughter’s Disney show, “Ready, Set, Don’t Go” is a truly sweet song. This is a fave pick of our Social Media Assistant Jane. “As someone who remembers Billy Ray Cyrus primarily as Miley’s dad and not the Achy Breaky Heart Guy, Ready Set, Don’t Go is a tear-jerker.”

Another refreshingly upbeat Father/Daughter song about the excitement that the future holds.

Another nostalgic song about the support a parent provides that builds to a beautiful height.

Written as a lullaby, “Forever Young” is about wanting to preserve a moment and feeling nostalgic about the past. Don’t forget the other versions of these songs, too!  “You know I can’t get enough of Rod’s acoustic version of Forever Young!” said DJ Eric Smith.

Another song about fidelity, preservation, and support through dark times.

We’re ending with the King of Ballads: Michael Bolton. He sings a song about all a father would do for his child.

Submit a Comment or Act Review below. Please DO NOT use this area for booking inquiries. Use the "I Want It" button above or contact the office.