The book may be fiction, but the mention of the Jerry Bruno Orchestra echos testimonials we receive every week from happy clients.

Linda Lee Smigel recently published Once Upon a Choice through Infinity Publishing. On page 56 she included this interesting mention of our most popular band, also known as “The Orchestra.”

This fact was brought to our attention by our friend Theresa Hahn of The Ritz. As Ms Smigel doesn’t appear to be a past client of ours, we wonder if she enjoyed the band at a local corporate event or friend’s wedding. Regardless, we are flattered!

If you’re itching to get down to the classy sounds of the Jerry Bruno Orchestra, there are two big events to look into during September.

Thank you to Fallon’s Photography for sending us these official photos from the fabulous event, Viva La Rock, at the Rock N Roll Hall of Fame. Viva La Rock was a private party put on for Cleveland businesses to get to know how great a venue the Rock Hall is for events. For the night’s entertainment, the Rock Hall asked Jerry Bruno Productions to produce the entire evening of musical entertainment. 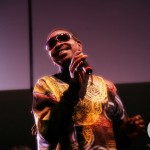 Fred of The Orchestra doing a mean Stevie Wonder 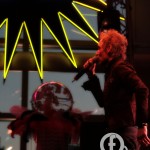 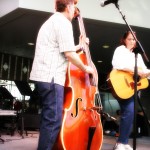 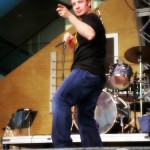 Funnyman Judson Laipply of the Evolution of Dance fame. 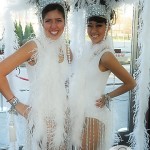 Every event is more fabulous with showgirls 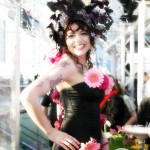 “I worked with Pete often…years ago,” said Jerry Bruno. “It must have been fate when he walked back into the office last year.  He immediately became our go-to fill-in for many of our bands, and then when we needed him most he was able to step right into this key position. Of course we all miss Chris, but we’re all thrilled to have Pete in the Orchestra.”As a keyboardist, producer, composer and recording engineer, Pete Tokar has been an active member of the areas music scene for over 25 years. As well as performing with numerous area groups, composing soundtracks and jingles, Pete has a long and distinguished discography in the recording industry. He has received several gold and platinum record awards and performed, engineered and mixed the 2008 Grammy Award winning track “In My Songs” by the late Gerald Levert.

In addition to his duties as keyboardist with the Jerry Bruno Orchestra, Pete has spent the last few months working on an album for 2007 American Idol runner-up, LaKisha Jones.

The Jerry Bruno Orchestra will play until 9 pm for free!  Bring your own chair!

The new gazebo is 32 feet wide with 675 square feet under a double-tiered roof.  All free concerts will be held on Sunday nights.

Stan Hywet Hall & Gardens hosts its annual gala on Friday, June 20, 2008. A formal, black-tie benefit that raises funds for the restoration of Stan Hywet’s gardens and historic landscape, the gala is now in its 13th year and is organized by Stan Hywet and its volunteers –co-chairs are Laura and R.J. Nemer.

The theme for this year’s gala is “Midsummer Elegance.” Jerry Bruno is providing entertainment and A Taste of Excellence is the caterer. New this year is a silent auction.

The reception, from 7-8 pm, takes place on the West Terrace and is set against the backdrop of the beautiful gardens at Stan Hywet. Dinner and dancing follows on the Bowling Lawn from 8 pm to midnight. Patrons are invited to attend a special patron party from 6-7 pm on the South Terrace.